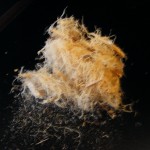 The kind I have is the shredded bark which smells like maple syrup to me.  The earlier colonists used the bark to treat coughs (it is still used in lozenges), sore throats, and even urinary tract infections. The Native Americans used the bark as a topically for cuts, boils, and cold sores. It became popular from treating bruises such as black eyes, and was also used on gunshot wounds during the American Revolution.

“Elm pollen is quite allergenic. The bark may also cause contact dermatitis in sensitive individuals (1)”.

Please do not take herbal remedies without talking with your doctor first.